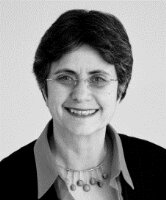 Virginia Dominguez was born in Havana, Cuba in 1952. After her family left Cuba in 1960, Dominguez attended elementary and middle school in New York; San Juan, Puerto Rico; Bergen County, New Jersey and high school in Montevideo, Uruguay. Her family’s moves were connected to her father’s work in international business. After graduating from high school in 1968 and prior to beginning college in 1969, she lived with her parents in Guadalajara, Mexico. In 1969, Dominguez was among the 230 women who entered Yale University as freshmen and members of Yale’s first co-ed class. During college, Dominguez’s parents lived in Beirut, Lebanon, where she joined them on breaks. Anthropologist Sidney Mintz played an important role in the development of Dominguez’s intellectual interests as an undergraduate at Yale. She graduated from Yale with a B.A. (summa cum laude and Phi Beta Kappa) in 1973.

Dominguez has written on race, social classification, identity, law, evidence and epistemology, and global and transnational processes. White by Definition is based on her dissertation research, and deals with race, identity and social classification in Creole Louisiana. In the 1980s, Dominguez began conducting research on issues surrounding Jewish-ness, identity, and classification in Israel. She published People as Subject, People as Object: Selfhood and Peoplehood in Contemporary Israel in 1989. In addition to her continued writing on race, identity and social categories, many of Dominguez’s recent writings have demonstrated a concern with questions of evidence and epistemology in the field of anthropology and beyond.

Dominguez completed her M.Phil (1975) and Ph.D. (1979) at Yale. From 1976 to ‘79 she was a Junior Fellow at Harvard. After finishing her Doctorate, she taught in the Department of Anthropology at Duke University from 1979 to ‘91. She also taught at the Hebrew University of Jerusalem from 1984 to ‘85. After leaving Duke, Dominguez taught at the University of California at Santa Cruz from 1991 to ‘93, the University of Iowa from 1993 to 2006, as well as at Eotvos Lorand University in Budapest in spring 2001. In 2007 she moved to the University of Illinois at Urbana-Champaign, where she is currently the Edward William and Jane Marr Gutgsell Professor of Anthropology, as well as a member of the Jewish Studies, Middle Eastern Studies, and Caribbean Studies faculty. Dominguez has also been Directeur d’Etudes at the Ecole des Hautes Etudes en Sciences Sociales in Paris, a Simon Professor at the University of Manchester, and a Research Fellow at the East-West Center in Honolulu.

Dominguez has been awarded grants for her individual scholarship and collaborative projects by the Social Science Research Council (1981-2); the Mellon Foundation; Fulbright (1984-5); the Ford Foundation (1995-1998); the Rockefeller Foundation (2001; 1995-1999); and the U.S. Department of Education (1997-2001). In 1995, she was invited to give the prestigious Morgan Lectures at the University of Rochester. She is author or editor of ten books and monographs, editor of twenty issues of the journal American Ethnologist, and author of ninety-five academic articles and book chapters.

Dominguez is Co-Founder, with Dr. Jane Desmond, of the International Forum for U.S. Studies (established in 1995), and Co-Editor of its book series, “Global Studies of the United States.” She served as the President of the AAA’s Society for Cultural Anthropology from late 1999 to late 2001, editor of American Ethnologist from 2002 to 2007, and has served on the Editorial Boards of twelve other academic journals. Dominguez was President of the American Anthropological Association from 2009 to 2011.

While AAA President, Dominguez ran a series of podcasts entitled “Inside the President’s Studio,” in which she interviewed anthropologists from across the field’s diverse sub-fields and across the globe. Dominguez lead an effort to found Antropologos sem Fronteiras (Anthropologists without Borders), and in 2013 succeeded, in collaboration with the World Council of Anthropological Associations in her role as elected Chair of the Council, to legally establish the organization in Brazil.