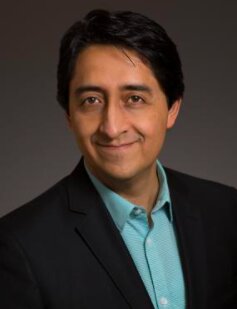 Bass-baritone Ricardo Herrera performed the title role in Mozart's Don Giovanni with the Aspen Music Festival under Julius Rudel in 1997, and the next year he became a member of the Juilliard Opera Center and sang in several Opera productions directed by Frank Corsaro and Ted Altschuler including La Calisto, Cosï fan tutte and Weill's Der Kuhhandel. In 1999 he was honored with the First Prize Award Winner of the Licia Albanese-Puccini Foundation Competition in NYC and was also invited to participate in Placido Domingo's Operalia World Opera Contest.

While at Juilliard he was chosen to represent the Voice Division for a PBS City Arts documentary on Juilliard entitled Taking the Vow. He was a 1999 Merola Opera Center participant in San Francisco and performed the title role in the Western Opera Theater National Tour of Don Giovanni. During the summer of 2000, after participating in the premiere season of Opera Aegean in Greece under the Artistic Direction of Sherrill Milnes, Mr. Herrera received the Demodocus Award that entitled him to his Carnegie Hall debut as the bass soloist in Beethoven's Symphony No. 9 in D Minor. In 2002 he received the Adler Fellowship with San Francisco Opera and appeared in many San Francisco Opera productions including La Traviata, Eugene Onegin, The Mother of Us All, and Billy Budd. He has sung many concerts and recitals in Europe including a recital of music by Paul Bowles in Palma de Mallorca, Spain; L'enfance du Christ by Berlioz in the Cathedral of Monaco, and a recital of Opera arias and Mexican songs in Greve, Italy. He made his European Operatic debut as Escamillo at the Oldenburgisches Staatstheater in Germany.

Recent engagements include Don Giovanni with Pine Mountain Music Festival, Mozart's Requiem and Brahms' Requiem with Marin Symphony,Carmen with El Paso Opera, Elijah with San Francisco City Chorus, The Dream of Gerontius with Kalamazoo Symphony, Earthrise with San Francisco Opera, Macbeth with Berkeley Opera, Semele and Agrippina with Chicago Opera Theater, and L'italiana in Algeri with San Francisco Opera. In 2005 he performed the roles of Tiresias and Le Veilleur in Enesco's Oedipe with Sinfonia da Camera under Ian Hobson. Upcoming engagements include several feature roles with San Francisco Opera, The Celebrant in Bernstein's Mass as part of the 75th Anniversary Jubilee of the UI College of Fine and Applied Arts, Figaro in Nozze di Figaro with Sinfonia da Camera, and several recitals with New York Festival of Song.