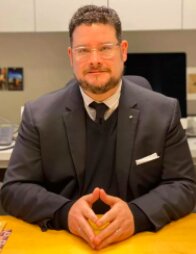 For nine years, he served as Dean of the University of Puerto Rico School of Architecture and has taught and lectured at various universities in Europe, Asia, Latin America, Africa, and the United States. He has been invited by the American Academy in Rome as a Visiting Scholar and by many prestigious universities as Visiting Critic, including the AA, MIT, Harvard, Penn, Cornell, Barcelona, Seville, Toronto, Madrid, Barcelona, the Glasgow School of Arts, Tulane, Rice, the Istanbul Technological University, and the University of Johannesburg.

Professor Rodríguez-Suárez served as the director of (in)forma, an award-winning academic journal, and has edited five books including Alma Mater, Aula Magna, Chronologies of an Architectural Pedagogy, De Buena Tinta, and Contemporary Architecture in Puerto Rico 1992-2010, a joint effort with the AIA.

His practice, RSVP Architects, has earned over 10 AIA-PR Awards and Citations and several BIENAL awards in seven different categories. Rodríguez-Suárez is a Fellow of the AIA and was selected by El Nuevo Día newspaper as one of the ten most influential pioneers in Puerto Rico for the year 2008, when he collaborated with artist Ai Wei Wei on the Ordos 100 project in China. He recently finished his term as President of the Association of Collegiate Schools of Architecture (ACSA), an organization that had previously recognized him as Distinguished Professor.